I have a confession: I’m a graphic designer.

I’m a graphic designer and I work for the biggest gun store chain in the southeast United States… and I love it.

It’s a curious thing, a vegan working for a firearms retailer. The breakdown of my coworkers and our clientele goes something like this: sport/target shooters, gun-collectors, people looking for protection, and (you guessed it) hunters. Damn.

You might think that as a Vegan it’s hard to hear about hunting frequently. But honestly it doesn’t come up too much in my position. On the rare occurrences that I happen to be on our sales floor, I deal mostly with handguns – not the kind used for hunting so I’m not required to offer advice on the “sport.” And my coworkers tend to ask me more about my Vegan habits than I ask them about their hunting ones.

Everyone I work with is well aware of my lifestyle (especially because I started my transition while working here) and generally act intrigued. I always get inquiries about what I’m eating for lunch… usually followed by a “why?” when I tell them. It gives me a chance to let people (read: hunters) taste vegan food. And that’s my goal! To share a plant-based diet with those who know minimal about it and who wouldn’t normally try it. Some are opposed to even trying it which gets frustrating because I think that is SO close-minded! But a lot of my colleagues are accepting and interested often asking for bites of my meal. That’s rewarding.

There have been times I’ve made entire vegan pizzas for our team to eat at lunch, or times I’ve specifically brought an extra serving of Red Curry Coconut Kale soup so others could have a taste (and I’d still get my full serving too). And even times on someone’s birthday where I’ve brought a vegan raspberry chocolate cake alongside someone bringing the company-standard Publix strawberry chocolate cake. Guess what? Everyone tried both.

It’s cool because for my birthday my coworkers didn’t get that Publix cake. They went out of their way – to a different Publix aisle – and surprised me with Oreos which they stacked like a cake and stuck candles in the icing. Acceptance is another of my goals and that made me SO HAPPY.

Back to the hunting thing again: I sometimes (rarely, but it happens) promote the purchasing of long guns – the kind normally used for various hunting activities. But just because long guns are available for purchase from my employer doesn’t mean I’m an advocate for hunting. Just because we sell guns doesn’t mean we are advocates for murder.

I work in and love the gun industry for the self defense option it offers people and because shooting targets is satisfying and fun. Hunting may or may not come up in conversation with customers and if it does I have no advice to offer. Those sales (I can probably count on one hand how many I’ve encountered) get passed on to someone who knows what they’re talking about. Someone who wants to talk about it. It’s not my place to tell someone their habits are right or wrong at work. It’s not my place to lecture them. I simply don’t participate in a sale if I know of their hunting intention. 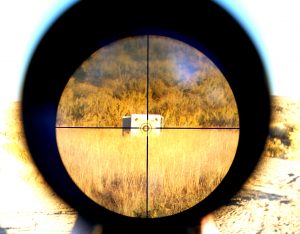 Just like I and my coworkers wouldn’t partake in a sketchy sale with other bad intentions. (Note: long guns can be used for self defense and target shooting as well! They’re not only designed for hunting.)

But what I can do is share my knowledge and experience with a different audience (namely  my coworkers) than you’ll find at a vegetarian food festival. And that’s priceless (well I get paid to be there, but you get what I’m saying).

Some people might argue and say it’s contradictory to promote the sale of potential hunting gear while advocating for the love of animals. Go ahead. I love this industry and don’t believe it to be centered around hunting, but rather believe it is centered around protection. And I thank those I work with who are accepting and open-minded to a Vegan lifestyle.

THIS is why I want to embark on this adventure with Shmeds. I want to eat, live, and preach Vegan as much as I can – not bite my tongue with customers at work because it’s not appropriate. I’m thankful for my job and I love what I do. These connections are amazing to have to inspire a new audience to try out Veganism, and I will be forever grateful.