It’s nearly impossible to find gravy in stores without dairy or meat in them; and we’ve created homemade gravy by quickly whisking flour, broth, and mushrooms together. Though this method works and produces delicious gravy, it takes a bit more attention than what we sometimes have time for. We wanted to create an easy and flavorful gravy recipe for you that can simmer alongside some boiling potatoes, so you don’t have to think about whisking it. Oregano and thyme compliment the earthy spice lentils provide for a savory, wholesome flavor as well.

The best part though? Lentils are full of protein!  Serve this nomz atop mashed potatoes with a cup of sweet green peas and you’ve got a main entree with around 12-15 g of protein. We garnished ours with whole cilantro leaves… and that was just the icing on the cake. Yeah, cilantro gravy is so good we’re comparing it to icing.

We can’t wait for Thanksgiving this year to whip this baby up for our extended fam! (Makes about 24 oz) 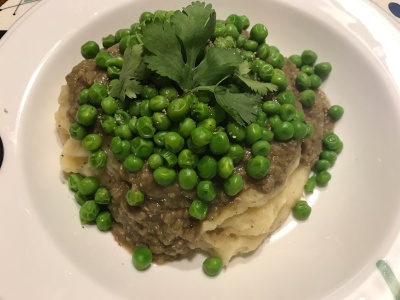 First soak your lentils (if necessary) and prepare the onion.

Heat the oil over medium heat in a small pot. Toss in the onion and saute for a couple minutes until they start to become translucent. Next pour in the lentils, spices, water, and veggie broth; then stir and bring to a boil. As soon as the mixture starts to boil, turn the heat to low, cover with a tilted lid and let simmer for 20 minutes or until most liquid is absorbed.

Once most of the liquid is absorbed, turn off the heat and pour the mix into a blender or food processor. Blend until smooth.

Serve immediately or pour back in the pot, cover, and place over low heat until ready.