The biggest thing you hear people say when you talk about veganism is “I just couldn’t give up cheese!” Well I have two things to say to that: 1) Give up whatever you want to give up! No one says you HAVE to commit to the title of vegan, vegetarian, or what have you. I’m a huge advocate for the newly coined term reducetarian. While I would love if everyone went vegan, I know that is very unrealistic. So I believe this reducetarian movement is a tremendous step in the right direction.

With that being said, cut out what you want to cut out! Neither J or I went cold turkey (or cold tofu, as some like to say) overnight. We both transitioned towards being vegan. We didn’t wake up one day and say, “Hey, I’m going to be vegan now.” No. We said to one another, “Why don’t we quit eating meat?” Then the next day we decided to take a stand against the dairy industry. Slowly but surely, we cut everything out. This took almost a year to make the full switch. 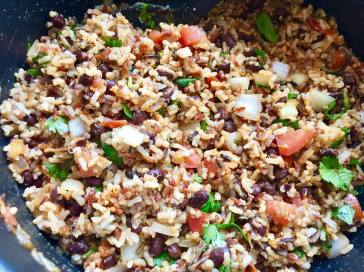 My point: we felt better because we weren’t promoting certain industries that exploit animals, our health, and our planet, while we also weren’t putting our bodies into shock by flipping our diet upside down out of nowhere.

So to my cheese lovers out there, still eat your cheese. But see if you can deal with cutting out poultry, seafood, red meat, pork, or eggs. Baby steps, everyone. Baby steps.

Okay, okay. I got a little carried away with number 1. Let me get to the second thing I had to say about not wanting to give up cheese…. 2) YOU CAN STILL HAVE CHEESE. Or, cheeze, as J & I like to call it. Follow Your Heart and Chao are AMAZING vegan cheese brands that you can easily find in stores. To us, they taste identical to dairy cheese. Both have pros & cons over the other. Follow Your Heart does not melt as well as Chao. However, Chao contains soy, while FYH does not. Miyokos Creamery is said to have outstanding gourmet vegan cheeses as well. Unfortunately, we have not gotten around to trying this brand yet.

Alright, I know what you’re thinking. L, what does this have to do with this recipe?! Well, friends, if you hadn’t noticed by now, I have an at-home cheeze recipe I am obsessed with. It has been incorporated in a few of our recipes on the blog already. I just can’t get enough of it. I literally scoop out the leftovers from the blender using my hands and lick my fingers. It’s that good. I’m so happy to share this recipe with you all. Use it straight from the blender as a cheeze sauce, as we did here, or heat it over the stove for 5 minutes, stirring frequently, to have a gooey cheeze for quesadillas, grilled cheezes, and more! Creamy, cheezy deliciousness. Indulge. Indulge. Indulge.

You can find this cheeze recipe in our French Onion Soup and Cheezy Squash Rollups, as well! 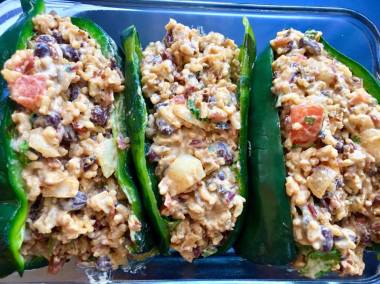 This was my first time working with poblano peppers, therefore outside resources were required for guidance. The cooking procedure for the peppers was adapted from Minimalist Baker’s Vegan Stuffed Poblano Peppers.

Sometimes you’re ballin’ on a budget and go for cheap beers…but not too cheap. Narragansett Lager is one of the perfect beers to satisfy your beer craving while not breaking the bank. This lager is perfect for peppery cheeses and spicy food. It’s a no-brainer that it’d be perfect for this dish.

Begin by cooking rice according to package directions.

Turn oven on high broil and place a large pot on stovetop over medium heat with oil.

Lightly coat peppers in oil and place on baking sheet on top rack of oven. Broil for 1-2 minutes on each side; skin should be blistered. Remove from oven, turn oven to 375°, and let peppers rest.

Once cool to touch, peel off blistered skin. Cut out stems, cut a slit down one side, and scrape out seeds. Set aside.

Throw diced onion in large pot with a sprinkle of S & P. Cook, stirring occasionally, for 4-5 minutes, then add tomatoes. Cook another 2-3 minutes, remembering to stir. Add black beans, give time to warm, and turn stovetop off.

While the veggies are cooking, combine all cheeze ingredients in a high-speed blender. Whiz for 2-3 minutes, or until creamy consistency has formed. If too liquidy, add a bit more arrowroot powder.

Lightly grease a deep baking dish. Stuff each pepper with mixture and place in dish. Bake for 10-15 minutes.

Garnish with any extra additives you’d like. Some yummy options could be avocado/guacamole, hot sauce, or salsa! Serve immediately.